‘Desmond’s Law’ in Connecticut is a model for other states

The woman in the fleece-lined flannel shirt stood quietly, eyes mostly downcast, glancing occasionally at her public defender and up at the white-haired judge. Speaking softly, Caitlin Fogerty, 35, said she was sorry for how she had mistreated Hannah, the German shepherd, and would never do it again.

But at another table in the unremarkable courtroom at Hartford Community Court stood University of Connecticut law professor Jessica Rubin and two of her students. They told of how Hannah, left for more than a year in the care of Fogerty — a former dog groomer — had lost nearly a fifth of her weight and was so neglected that she contracted scabies, making her fur fall out, some of it permanently. The animal suffered mental distress, too, they said, which made her distrustful of humans.

The prosecutor argued for a pretrial diversion program that would require Fogarty, a first-time offender, to repay $1,125 in veterinary bills and pledge not to work with dogs for two years — but leave Fogarty without a criminal record.

Veteran Judge John F. Mulcahy Jr. pondered aloud what might prevent pet owners from entrusting their animals to Fogerty again someday, if she had no record. The judge decided not to grant the accelerated rehabilitation. He scheduled the case for further court proceedings in March. Fogerty declined comment.

The prosecutor, Tom O’Brien, later said the advocates made all the difference in that decision.

“They had information and a methodical approach,” O’Brien said. “The animal can’t speak for itself.”

The case presented a clear illustration of Connecticut’s “Desmond’s Law,” named after a boxer-pit bull mixed breed who was brutally beaten, starved, strangled to death and dumped. The alleged perpetrator got a deal similar to the one initially proposed for Fogerty and was given no jail time. The first-in-the-nation law permits animal advocates in courtrooms for abuse cases involving dogs and cats. 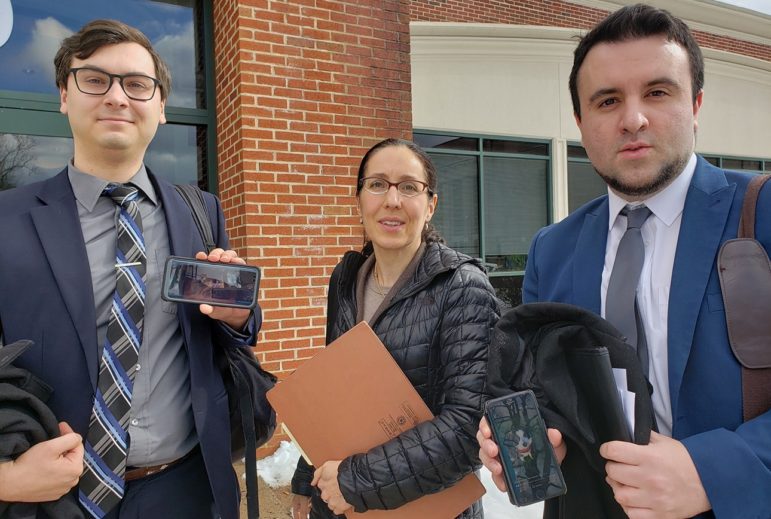 Rubin flanked by her two animal law clinic students earlier this month at the courthouse in Hartford, where they advocated for an abused dog in a legal case. Jesse Mangiardi, left, shows a cell phone picture of his two dogs, Thor and Luna, while Shaun Moloney, right, holds up a cell phone photo of his border collie, Jessica.

Animal-loving lawmakers in Maine hope to pass a similar law this session prompted by the death of Franky, a pug-terrier mixed breed. And legislators in a handful of other states — Illinois, Michigan, New Jersey, New York and Rhode Island among them — are getting into the animal advocacy act as well. Bills have been filed in several of those states and others are in the planning stages, most using the Connecticut law, enacted in late 2016, as a model.

They are just the latest in a spate of new laws governing animal-related legal proceedings. California has a new statute that outlines criteria judges can use to determine what’s best for a pet in a divorce custody case. And Arizona is cracking down on fake service dogs.

Technically, the court advocates are not representing the dogs or cats. But they are charged with providing information to the judge and the prosecutors about the circumstances surrounding a case involving animals, typically cruelty or neglect charges. Either prosecutors or judges can request the advocates.

Animal groups lobbying for the laws say prosecutors often have good intentions but have little time to research the animal cases themselves, meaning that alleged animal abusers often get light sentences or have their cases dismissed for lack of evidence.

But some defense attorneys argue that the advocates unduly bias both the judge and the court against defendants.

The criminal justice system is already “very heavily balanced against the accused,” said Oscar Michelen, a defense attorney and adjunct law professor at Touro College in New York. Animal advocates increase that bias, he said by phone from his Long Island office.

The Connecticut law allows law students to participate in courtroom activities as long as they are supervised by an attorney.

“The role is to advocate for the interests of justice and make recommendations and present information to the court,” said Rubin, owner of a shepherd mix named Holly and a hound mix named Cyndea.

The lawyers and law students working the cases do so without pay or cost to the courts, she said. In her program, the students get academic credit as well as courtroom and investigatory experience.

UConn law student Shaun Moloney had helped argue Hannah’s case before the judge, noting that Fogerty had not taken the dog to the vet for more than a year while she was caring for the pet, despite her skin disease. “These charges are serious and likely to recur,” Moloney said at court.

In the Desmond’s Law case that prompted the statute, the alleged perpetrator was placed in an accelerated rehabilitation program, after which his record could be expunged.

A group of animal supporters who call themselves Desmond’s Army attend many Connecticut cases to observe and make their presence known, wearing bright purple shirts or sweatshirts.

John Frascatore, a retired information technology worker and a member of the group, said on a recent afternoon that he was fresh from a case involving a man accused of killing four kittens and leaving them on his former girlfriend’s steps to punish her for breaking up with him. While that case was worked out behind closed doors, Frascatore said the group’s presence in open court was influential.

“The reason we do this is to show the court and the state attorney’s office that we don’t take animal abuse lightly,” he said. “We want the court to be aware someone’s watching.” 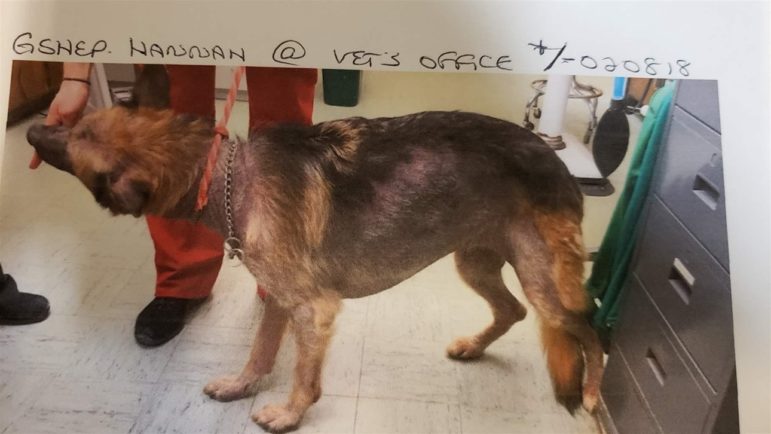 A photo of Hannah, an allegedly abused German shepherd, used as a piece of evidence in an animal abuse case in Hartford Community Court. A former dog groomer was accused of denying the dog food and failing to get a skin disease treated for more than a year, which caused Hannah’s fur to fall out, some of it permanently. Photo is courtesy of the Hartford state attorney’s office.

Doug Ovian, Fogerty’s public defender in Hartford, acknowledged that having animal advocates in the courtroom worked against his client in this case, but given the new law, he thinks it’s better to expand their understanding of the defense point of view rather than disregard them.

He encourages UConn faculty and students specializing in animal cases to give the same consideration to defendants as criminal law students do.

“It’s important [for defense attorneys] to engage with the [UConn] animal law clinic as much as the prosecutors do,” he added, “and for judges to fairly balance the arguments made by one voice for the defendants versus two or more against them.”

David Rosengard, a staff attorney with the Animal Legal Defense Fund, a national group based in California, said the drive for animal advocates in courts “is a burgeoning movement. We heard a lot of those [same] concerns and critiques around human crime victim advocates. We now have [human] victims’ advocates around the country, and the sky hasn’t fallen.”

But Michelen said the advocates present “another voice ringing” against defendants. “Sometimes it seems like people are more concerned about abuse against animals than they are of children or domestic violence,” he said.

But research shows the two are linked.

A seminal study, “The Relationship of Animal Abuse to Violence and Other Forms of Antisocial Behavior,” published in the Journal of Interpersonal Violence in 1999, linked animal abuse not only to domestic violence, which had long been documented, but also to other forms of antisocial activity, including property offenses, drug offenses and public disorder offenses.

A study published in 2018, “An Exploratory Study of Domestic Violence: Perpetrators’ Reports of Violence Against Animals,” led by a group of researchers from Virginia Commonwealth University and Long Island University, found that of inmates incarcerated for domestic violence, 81 percent reported perpetrating animal cruelty in their lifetime.

The American Kennel Club, famous for the Westminster Dog Show held every February in New York, also is wary of animal advocacy laws, saying that anything that smacks of giving “personhood” traits to animals could undermine ownership rights.

Phil Guidry, director of policy analysis and government relations at the AKC, said his organization wants to make sure the advocacy laws are not confused with “guardians ad litem” for children, a Latin legal term that means someone who is appointed to protect the interests of a minor. The Connecticut law doesn’t do that, and he would hope other states follow that model.

“In the legal system, we treat animals as property,” he said. “It has created a very reliable system in this country. It doesn’t mean we care less for animals — we just want to make sure that legal term continues. With bills pending in other states, we hope they will continue to be treated as property under the law, and should those assurances be placed in other legislation, we have no other concerns.”

Michigan state Rep. Abdullah Hammoud, a Democrat, is planning to introduce an animal advocates bill this session as part of a package of animal-related bills, including ones to prohibit devocalization of animals unless there is a medial purpose, require veterinarians to provide a fact sheet to clients before declawing an animal, and to ban private ownership of nonhuman primates.

“We know that Michigan can do better in protecting animals against cruelty,” said Hammoud, owner of a half Maltese, half Shih Tzu named Kussa, which means “squash” in Arabic. (He said the dog was the size of a traditional stuffed squash dish as a puppy.) “These animal advocates investigate the facts and then present recommendations to the judges, all pro bono.”

Maine state Rep. Dale Denno, a Democrat who owns a 16-year-old dachshund named Sebastian, said he will introduce similar legislation in his state this year, modeled on Connecticut’s law.

At present, he said, “It’s very easy for judges — if there’s nobody there looking out for the animal, and you have a heavy caseload — it’s easy to wrap up the case [with a plea deal and no record]. If the abuse is egregious, we believe the person should have a record, so if they go to get an animal, there’s a record of cruelty.”

This story first appeared Feb. 22, 2019, in Stateline, an initiative of The Pew Charitable Trusts.