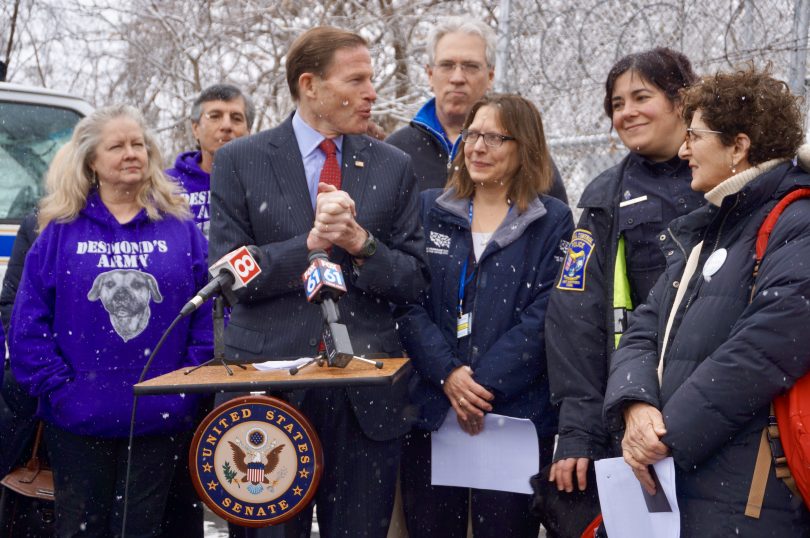 Sen. Richard Blumenthal used West Hartford’s Animal Control facility as a backdrop on Monday morning when he announced that, along with Republican Sen. Pat Toomey of Pennsylvania, he has re-introduced a bill outlawing a heinous form of animal abuse.

The Prevent Animal Torture and Cruelty (PACT) Act passed the Senate unanimously last year, but stalled in the House, and Blumenthal said it needs to be approved and signed into law as quickly as possible. 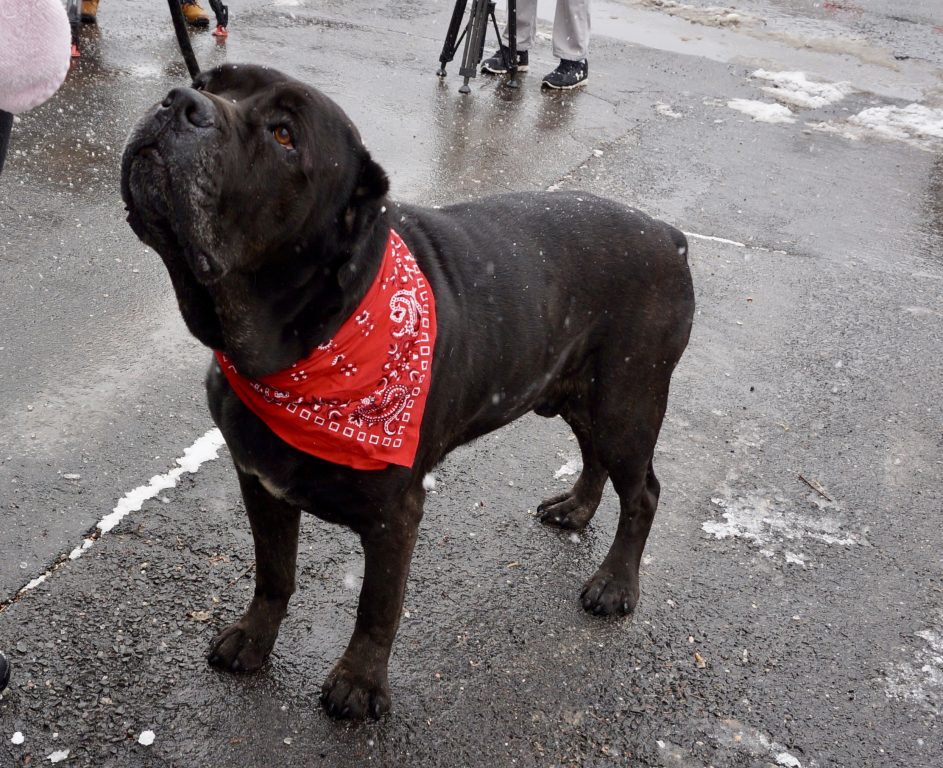 On a snowy Monday morning, surrounded by animal rights supporters, West Hartford Animal Control Officer Helen Lee, and Phil – a Cane Corso who is available for adoption – Blumenthal said, “Literally every day hundreds of dogs and other animals are maimed and injured, tortured, burned – it has to stop.”

Very often animal cruelty and torture is associated with other violent and criminal activity like domestic violence, drug dealing and human trafficking,, Blumenthal said, and is a warning sign of “severe danger to people.” And animal cruelty itself is “abhorrent to our basic humanity. In fact our treatment of animals is a testament of who we are as people,” he said.“To allow torture to continue is unacceptable,” Blumenthal said. “This year we are going to start [PACT] in the Senate but it will be given a vote in the House, I’ve been assured, we will keep it bipartisan.” He said it should be swiftly signed into law.

The PACT Act will outlaw “crushing” – a heinous form of animal abuse where animals are literally maimed and tortured through crushing. Videos depicting crushing have been outlawed, but the underlying act has not been made a federal crime.

PACT would make crushing a felony, and subject those found guilty to up to seven years in prison as well as significant fines, Blumenthal said.

Blumenthal said he is very proud that Connecticut has been at the forefront of efforts to increase the penalties for animal cruelty. “It’s also a crime itself to be cruel to animals. The horrendous torture, maiming, injuring of animals ought to be heartbreaking to everyone.”

Annie Hornish, Connecticut director of the United States Humane Society thanked Blumenthal for championing the bill, and said that animal welfare bills are important not only for protecting animals. “There is a documented link between abuse against animals and violence against people.”

Studies show that nearly half of all convicted murderers admitted to past animal cruelty, Hornish said.

Gordon Willard of the Connecticut Humane Society also thanked Blumenthal for his advocacy and added that the organization is still trying to convince people that “the link between animal cruelty, child abuse leads to other forms of crime.”

It’s about time we not only understand the link, Willard said, and understand we have the power to eliminate suffering. In addition, he said, “Animals are sensate beings and suffering on any level needs to stop.”

Jo-Anne Basile of CT Votes for Animals also voiced her support for the bill, as did Candace Bouchard of “Demond’s Army,” an animal rights group formed in response to the brutal murder of a boxer/pit bull mix named Desmond who had been adopted from a New Haven animal shelter. The adopter received accelerated rehabilitation as the only punishment for the brutal act.

“This is a huge complement to what we already have in the state of Connecticut,” said Bouchard. “It’s critical that we take these violent individuals off our streets, and out of our families and stop the cycle of violence, and this is another effort to go far in that way.”

The PACT Act is endorsed by the Humane Society of the United States, more than 200 local law enforcement agencies, the National Sheriffs’ Association, Fraternal Order of Police, and the Association of Prosecuting Attorneys.